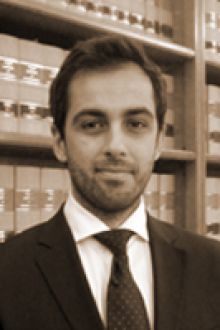 Rodrigo joined B. Cremades y Asociados arbitration and litigation department in January 2007. Since then his practice has focussed on domestic and international ad hoc and institutional commercial arbitration with various international institutions (ICC, TAS-CAS, CAM) and legal representation before different courts in matters regarding arbitration (setting aside and enforcement of awards, appointments of arbitrators, precautionary measures, exequatur proceedings in Spain of foreign awards, etc.).

Rodrigo Cortés is fluent in Spanish and English.

Rodrigo has participated both as advisor and lawyer in various arbitration proceedings, as follows:

ICC international institutional arbitration between a Spanish bank and a leading Turkish company in the production of fiber optic cable;

LCIA institutional arbitration between a Spanish gas multinational and a Spanish electric company in Latin America;

TAS arbitration within the IOC between an important international group from the sports sector and a sponsoring company;

TAS arbitration regarding doping within the IOC between a sports’ professional and the Spanish Sports’ Federation;

He has also participated as advisor and lawyer in diverse arbitration related legal proceedings, as follows:

Procedure for setting aside a foreign arbitral award between a Spanish company and a leading German multinational from the sports clothing and footwear sector;

Procedure for enforcement of an arbitral award between a Spanish company and a leading German multinational in the sports clothing and footwear sector;

Exequatur procedure for an arbitral award between a French energy company, market leader in gas and electricity and one of the largest electric companies in Spain and Latin America;

Apart from arbitral issues Rodrigo has also participated as a lawyer before different legal bodies in civil and mercantile legal proceedings, including:

Litigation concerning an important multinational supplier of money transfer and payment services and the restructuring of its management and business in Spain, Portugal, Eastern Europe and North Africa;

Litigation concerning and Italian security company and a Spanish company;

Litigation concerning a construction multinational and a Spanish company with regard to the construction of a power station.

Rodrigo has collaborated in the following publications